In 1803, the land that is now Twin Mill Farm became part of the United States in the Louisiana Purchase.  A year later, Lewis and Clark passed through the area and camped for 3 days in what is now Kansas City, Kansas. Zebulon Pike passed through in 1806 and labeled the area "The Great American Desert" on his maps, influencing the designation of the land west of Missouri for Native American resettlement.

By treaties made in 1825, the US granted, "to the Shawnee Indians within the state of Missouri, for themselves and for those of the same nation now residing in Ohio who may hereafter emigrate to the west of the Mississippi, a tract of land equal to 50 miles square, situated west of the state of Missouri and within the purchase lately made from the Osage." From 1826-1833, Shawnee Indians were moved to this area, "The Great American Desert" from the more fertile lands of Ohio and Missouri.

Mill Creek was named for the grist and sawmill that was built in 1836 for the Shawnee Indian community as an incentive to relocate under terms of the Indian Treaty.  The mill facilitated the local production of lumber, wheat flour and corn meal until it was destroyed by floods in 1844.  It was never rebuilt.

Travel along the California Road boomed beginning in 1849 with the gold rush when tens of thousands of fortune seekers joined the emigrant farmers heading west.  It is estimated that 200,000 people passed through Kansas, many using the Westport to Lawrence Road route.  Travel along the trail continued until 1869 when the Union Pacific and Central Pacific Railroads completed the first Trans-Continental Railroad.

Shawnee Indians continued to settle along the banks of the Kansas River, Bull Creek and Mill Creek until 1854 when Kansas became a territory, the reservation was dissolved and they were relocated to the newly established Indian Territory, now Oklahoma.  In 1854, 9 delegates appointed by the Shawnee Nation traveled to Washington City to sign a new treaty with the United States.  The Shawnee tribe agreed to cede to the United States the entirety of the land granted on November 7th, 1825 and May 11th, 1844; 1.6 million acres in total.  The United States then retro-ceded 200,000 acres from the Missouri state line west 30 miles and from the Kansas River to the southern county line.  Some land was designated for churches, missions and schools with the remaining land to be given to Shawnee Indians; 200 acres per person.  Signers of this treaty included George McDougal, Joseph Parks, Blackhoof, Longtail, George Bluejacket, Graham Rogers, Black Bob, Henry Bluejacket and Charles Bluejacket representing the bands that were party to the treaties of 1825 and 1831.  The Kansas-Nebraska Act opened the area and unclaimed land available for settlement.

In 1857, Monticello township was established in new Johnson County in the Kansas Territory.  It was named after the historic home of Thomas Jefferson and included the 27,000 acres of land; south of the Kansas River, north of 103rd Street, west of Ogg Road and east of Cedar Niles Road.  Monticello Township included the towns of Monticello, Zarah, Waseca (became Holliday), Wilder, Craig and Frisbie Station, was a key stage coach stop between Lawrence, Fort Leavenworth and Westport and a natural crossroads for fur-trading.  Pioneers would camp near the creeks on their way west.

March 22, 1858 at the age of 18, James Butler Hickok (Wild Bill) was elected as one of 4 constables of Monticello Township.  This was the first of several law enforcement jobs that he would hold.  Legends tell stories of Bill Hickok sharpening his shooting skills along the banks of Mill Creek.  His cabin near 83rd and Clare Road was burned by pro-slavery men in 1858, and he turned in his badge and abandoned his claim in the late summer of 1859 to head north to Nebraska Territory.

In 1859 a tornado tore through Monticello, destroying much of the town, but it was quickly rebuilt.  In the 1860's the township weathered grasshopper plagues and between the years of 1862 and 1864 Quantrill's guerrillas passed through on their way to sack Shawnee and Olathe. Property damage and a continual denial of rights prompted many of the Shawnee Indians to abandon or sell their land in Kansas and relocate to Indian Territory.

In 1874, after the Civil War, Monticello Township was still bustling and boasted 8 school districts each with substantial school buildings.

In 1907, Kansas City real estate promoter, cattleman and banker; Richard W. Hocker took over the struggling Kansas City and Olathe Electric Railway, abandoned plans to compete with the Strang Line in Olathe, and changed the name to Kansas City, Lawrence and Topeka Electric Railroad Company.  He completed a line to Merriam where he owned acreage, and continued construction westward to Shawnee.  The Hocker Line was completed in the fall of 1908 and terminated just east of Zarah at Mill Creek but the planned expansion to Lawrence and Topeka never happened.  The olive green cars of the main line ran from the Monrovia Station to Southwest Boulevard, Main Street and City Market from 6:00 am until midnight.  Smaller cars were used for the route west to Zarah.  The popularity and convenience of motor cars caused ridership to decline, especially in the rural and farming communities, and the the Hocker Line ceased operation in 1927.

Twin Mill Farm Connection:
The Hocker Line followed the Kansas City, Lawrence and Topeka Road, now Lawrence Road which is the access road to Twin Mill Farm today.  The line ended east of Mill Creek at Starrwood Park (now the Knights of Columbus Park) where there was a dance pavilion that featured live bands and was a popular gathering spot for the residents of Monticello Township and nearby Zarah.

The flood of 1951 finally erased several of the smaller towns in Monticello Township including Holliday, Wilder and Frisbie Station.

The land was operated as a dairy farm beginning in the 1930s. When the old farmhouse was razed, a receipt for milk sold to the Zarah Market was found.  In 1963, Dr. Robert W. Hamill and his wife Virginia purchased the land, and Twin Mill Farm was established as a horse boarding stable in 1969. The land was purchased by Chip and Becky Newcomer in 1990 who made improvements to the facility and have passed it on to their daughter, Courtney and her husband, John Nelson who continue to operate it as Twin Mill Farm today.

Shawnee and Lenexa began annexing the lands of Monticello Township in the 1970s and the final parcels were disorganized in 2006.  The stories of this history-rich area are kept alive by the Monticello Historical Society and Museum

The McDougal land was sold to Elias Garrett in 1860.  Elias married Margaret Jane Davison on the 21st of April, 1861 and she sold the land to her parents, Joseph and Ann Davison after Elias’ death in 1868. The 1874 map of Section 13, Township 12, Johnson County, Kansas shows J Davison as the owner of both the southeast quarter of section 13 and the east half of the northwest quarter which includes the Goode property.  In the 1902 map, Margaret J. Ogle is listed as the owner of the east half and the southeast quarter of the northwest quarter of section 13.  We can assume that she inherited this from her parents.

Most recently serving as the Goode Brothers’ Asphalt Company office, the building which was built in 1930’s and is situated at the corner of Midland Drive and Lawrence Road, has served several other purposes throughout its history.  It appears to have initially been built as a gas station (pending research) in the early 1930's by Kansas City real estate man, Byron Theodore Shutz. The gas station was built just as Highway 10 was put through in 1933 on what is now Midland Drive. The building has been used as an Armory office, and was converted to Shawnee Fire Station #3 in March of 1971, the garage bay was enlarged to accommodate a fire engine and the warning siren is pictured on the roof.  There is a bricked over opening on the south side that was the original entrance to the toilet. The building remained a volunteer only station until January 9, 1989, and with the merger of Shawnee stations #1 and #2 in the late 1980s, it was renamed Fire Station #2.  In 1985 when Marie Ussery sold the building to the Goode Brothers, Dan, Donald and William, the City of Shawnee, built a new station across the street on Midland Drive.  The station is shown below in its original form with the old farm house in the background. The building was purchased by Twin Mill Farms in 2014, remodeled in 2017 and currently serves as an office and occasional pop-up farm stand for Twin Mill Farms. 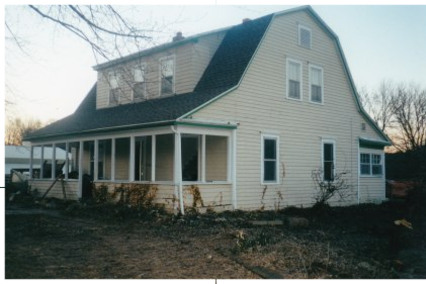 The History of the Land 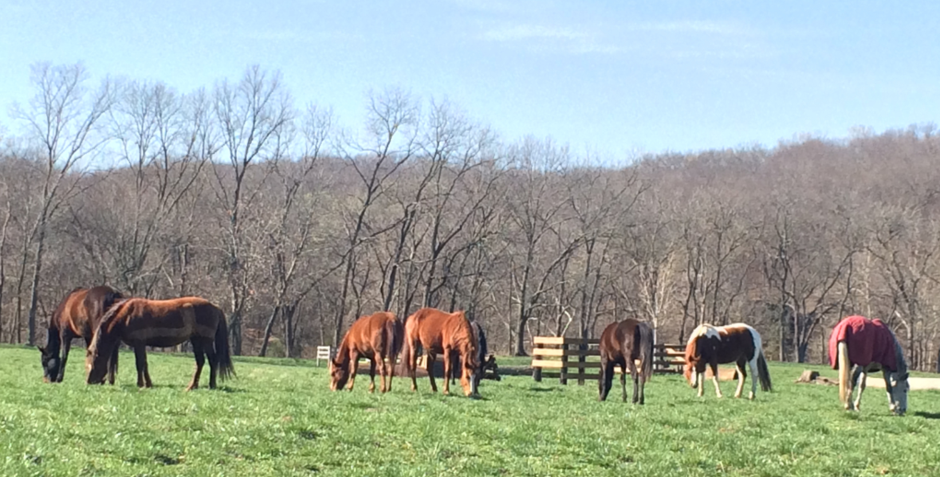 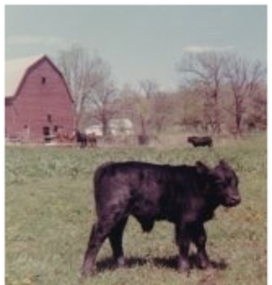 The History of 19115 Midland Drive

Photos: The building is shown on the left in its original form. On the right, you can see the enlarged garage bay and warning siren on the roof. The man-door on the garage bay has since been bricked in and the original entrance to the toilet is bricked in but still visible in the photo on the left..Type your paragraph here.